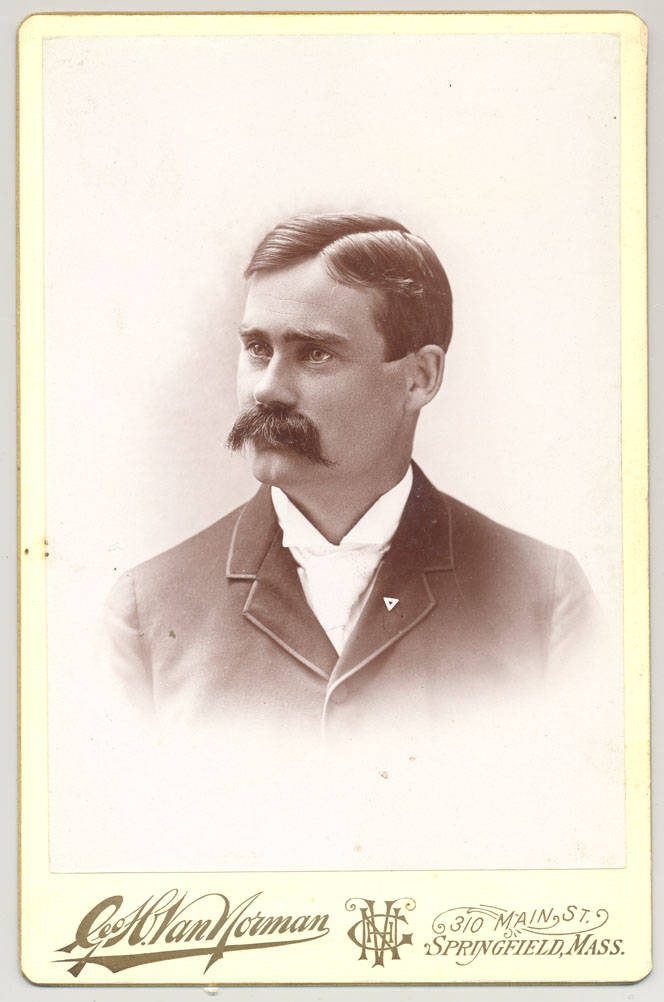 Dr. James Naismith is among the most famous names in sports and an interesting figure in North American history. Myths surround his life, his motives, and his best-known creation, Basketball! Who was this innovator? This man from a small Canadian community?These questions have intrigued many a researcher. Below are just a few facts on his life. James Naismith was born in Almonte (now part of Mississippi Mills), Ontario, Canada on November 6, 1861. He was orphaned at age ten and raised by his maternal grandmother and then uncle. Although Naismith dropped out of high school for several years, he later returned and graduated. He continued his education at McGill University in Montreal with an A.B. in 1887 and Presbyterian College — also in Montreal — with a religion degree in 1890. R. Tait McKenzie, the noted educator, physician, and sculptor, was also born in Almonte (1867), and he and Naismith were childhood friends, fellow students at McGill, and later colleagues. In 1890 Naismith moved to Springfield, Massachusetts to attend the YMCA Training School (which became the International YMCA Training School in 1891 and is now Springfield College) and study physical education as a student in the School’s special one-year course. He graduated in 1891. Naismith also became an instructor at the school, a position he held until he retired in the spring of 1895. Amos Alonzo Stagg, the famous collegiate football coach, was a classmate of Naismith and remained his friend throughout his life. Naismith played center on the School’s first football team, known as the Stubby Christian’s or Stagg’s Eleven, under the direction of Amos Alonzo Stagg. At his 1891 commencement, Naismith read an essay “Psychology of Exercise.” During his time as professor at the YMCA Training School (1890-1895), Naismith instructed such courses as “Animal Mechanics,” “Study of the Bible by Books,” “Psychology,” “Ethics,” “Methods of Christian Work,” “Outline Study of Man,” and “Man as an Individual.” Naismith was also an instructor during the Physical Department’s summer sessions, instructing courses like “Anthropometry” and “Swedish System of Gymnastics” (1891). Along with fellow students Amos A. Stagg, William H. Ball and the head of the Physical Department Luther H. Gulick, Naismith was one of the founding editors of the Physical Department’s publication “The Triangle.” The Triangle started in February 1891 and became “Physical Education” in March 1892. He contributed numerous articles and editorials to this journal during his time at Springfield and was also elected editor of the publishing company that developed out of this venture, the Triangle Publishing Company, alongside Luther H. Gulick, president, and Frank N. Seerley, business manager. Naismith is best known as being the father or inventor of basketball, which he introduced to his class on Dec. 21, 1891 at the YMCA Training School to provide the students with a game to play indoors during the winter months. Although he left Springfield in 1895, Naismith remained one of the College’s corporators until his death in 1939 and returned often to visit. Naismith moved to Denver, Colorado in 1895 and served as the physical education director of the YMCA. He attended medical school at the University of Colorado, known at the time as Gross Medical College. Naismith earned his medical degree in 1898. After the death of a young gymnast under his direction, he and his family moved to Kansas, where Naismith worked at the University of Kansas as an associate professor, the chapel director, and the University physician. Naismith also coached the University’s first basketball team in 1899. In 1936, Naismith traveled to Berlin, Germany to attend the first Olympic basketball game. He retired from the University of Kansas in 1937, and he died two years later, on November 28, 1939, in Lawrence, Kansas.
By Rachael A. Salyer, June 2009
Updated: March 1, 2020

Want more information on the life of James Naismith?

Check out these links for information in our collections: